China is constantly upgrading its military preparedness since the standoff with India began in eastern Ladakh in May. The latest changes are being observed through satellite imagery at Hotan in occupied East Turkestan, now Xinjiang, which is one of the People’s Liberation Army Air Force’s (PLAAF) major fighter airbases.

Latest satellite images show the construction of an underground automated command and control centre at Hotan, China’s nearest base to eastern Ladakh. For the first time, a Y-20 strategic transport aircraft has been observed at the airbase, indicating a probable deployment of additional troops.

India Today had first reported about the deployment of China’s fifth-generation J-20 stealth fighters at Hotan airbase in July and August 2020, albeit for a short period. The satellite images over Hotan indicate that air activity at this airfield increased in October this year.Although the construction work that began on the runways in June has slowed down, the operational work is progressing steadily.

To prepare the Hotan airbase for any eventuality, the PLAAF has started underground constructions.

The high-resolution satellite images of October 26, 2020, clearly show that the additional constructions for more troops are probably of the PLAAF or PLA Rocket Force (PLARF). There are three underground constructions noticed which are likely to be deeply buried complexes.

The size of 15m x 6m with other signatures suggests that these three underground deeply buried structures are going to be possible headquarters and operations rooms of the PLAAF and PLARF.ADVERTISEMENT

The constructions observed in October this year strongly indicate that this could be a command control and intelligence center (C2I) likely to be connected soon with the C4I grid of the PLAAF and PLARF.

The underground construction of these modules strengthened with semicircular steel rebars indicates they will be difficult to destroy unless special earth penetrating bombs are used.

The latest satellite images covering Hotan clearly show that the grading work for two new airstrips and taxiway which began in June 2020 is progressing at a very slow pace. The satellite images indicate that the work on the new runway and taxiway connecting from the eastern end of the old runway still continues as of December 5.

The slow progress of grading work suggests a possible resource crunch in the PLAAF. 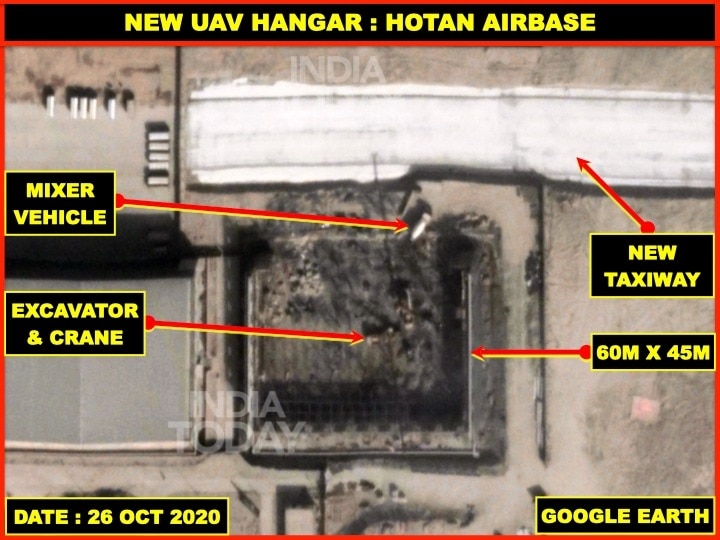 A new hangar is seen under construction next to the UAV apron and hangars. The location implies that this 60m x 45m hangar would also be used by UAV squadron located at Hotan. The aircraft with two large vehicles and askew parking indicates the haste for leaving the apron and also that it was a temporary deployment for a very brief period.

The deployment of specialised aircraft two AEW KJ-500 and two High New 4 ECM remains the same as before.

Surprisingly, two CH-5 UAV aircraft are observed parked at the UAV apron in the east of the runway.

These are observed throughout the month of October parked at almost the same place. These UAVs could be used for the live coverage of Indian forces in eastern Ladakh.

There are three additional ground control systems for UAV handling observed at this airport deployed at the beginning of October. An additional satcom vehicle with a dish antenna is also seen throughout October.

These additional ground control systems and satcom vehicles indicate strongly that UAV activities from this airbase for recce and monitoring of Indian forces in eastern Ladakh has increased manifold in October.

(Col Vinayak Bhat (Retd) is a consultant for India Today. A satellite imagery analyst, he served in the Indian Army for over 33 years.)