1. The subjection of peoples to alien subjugation, domination and exploitation constitutes a denial of fundamental human rights, is contrary to the Charter of the United Nations and is an impediment to the promotion of world peace and co-operation.

2. All peoples have the right to self-determination; by virtue of that right they freely determine their political status and freely pursue their economic, social and cultural development.

3. Inadequacy of political, economic, social or educational preparedness should never serve as a pretext for delaying independence.

4. All armed action or repressive measures of all kinds directed against dependent peoples shall cease in order to enable them to exercise peacefully and freely their right to complete independence, and the integrity of their national territory shall be respected.

5. Immediate steps shall be taken, in Trust and Non-Self-Governing Territories or all other territories which have not yet attained independence, to transfer all powers to the peoples of those territories, without any conditions or reservations, in accordance with their freely expressed will and desire, without any distinction as to race, creed or color, in order to enable them to enjoy complete independence and freedom.

Invaded by Communist Chinese forces in 1949, the once sovereign and independent country of East Turkistan was invaded, its government overthrown, and its people subjugated. Untold numbers died. As the Chinese occupation of East Turkistan progressed, universal freedoms began to disappear.

China’s policy of occupation and oppression has resulted in no more or less than the destruction of East Turkistan’s national independence, culture and religion, environment, and the universal rights of its people. Time and time again, infliction of this destruction sees China break international laws with impunity.

WHERE IS EAST TURKISTAN? 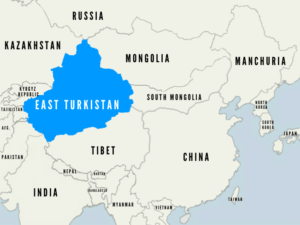 East Turkistan, located in the  very center of Asia, is the historical Homeland of the Uyghurs and other Turkic Central Asian peoples. East Turkistan has effectively been occupied by China since December 22, 1949. East Turkistan neighbors nine countries – Mongolia (including South Mongolia), Russia, Kazakhstan, Kyrgyzstan, Tajikistan, Afghanistan, Pakistan, India, and Tibet.